The “Painters Forest” is one of many exits along the “Grand Loop Drive”. But its quite a special one. After a short walk, though a pine forest, the trees open and one is in the middle of a strange landscape. Its similar to the scenery in autumn, then fog covers the grassland. But here its the steam of boiling hot water, which makes you believe you have been teleported into a fairytale.

A bit further up the path, after short, but step climb uphill, the colorfully painted landscape is presented. The vegetation and the geyser driven landscape create a lovely picture.

Alongside that colorful picture, a group of mud geyser‘s creates bubbling sounds. Watching, the thick mud to form perfect round balls, which shortly after their creation burst, seems to be quite paralyzing. At least I suddenly realized that, this particular group of geysers seems to have gotten quite a bit more of my attention, than the others around them. But quite obviously, that was not just done to me, but the entire audience. 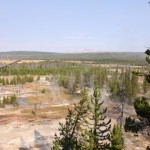 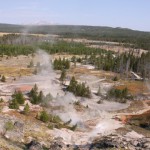 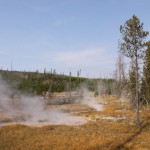 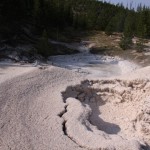 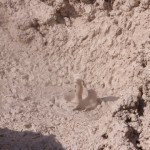