… It kind of started two days ago. Still I have not seen the “Great Fountain” yet. At least not in action.

This morning thought it looked like I might have a chance to see the morning show. When I arrived at around the end of the time window, it was blowing quite a bit of gas and in intervals it looked like the pool was boiling.

Yet, there was no sign that the fountain really is about to erupt.

So time to spend with some bison hunting…

… A few hours later and within the next possible time window I arrived back at the site. Let’s sit it out and aim for the night show. There is actually already quite a crowd at the site. Good sign – it did not went of early in it’s four hour time window.

Now every change in condition, like the water going down instead overflowing is commented by the eagerly waiting audience. Some of them give up after waiting half an hour and no sign towards an eruption. But most know it will happen once in a while. Be it in an hour or two.

According to the description, the procedure to “launch” will actually take up to another two hours. So time to grab the extra cloths as it’s going to be quite chilly.

In the meanwhile nature is entertaining the waiting people with a really beautiful sky full of stars and some Elk’s roaring in the distance.

Finalize, the boiling starts to get more intense and suddenly the long awaited eruption start to begin. It spit out quite a bit of water and the fountains where really great to watch in the light of torches and flashed. However taking a real good picture under these conditions does not work out. So this experience is one that lives in the memory only. 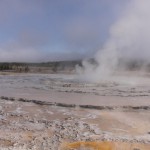 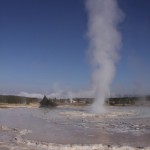