After seeing quite some impressive formations built by sandstone, which was created by deserts, beaches, mud etc, I today saw massive mountains created in a total different way.

The big formations, such as the half-dome, at “Yosemite National Park”, which stand out very impressive and may go up as much as 1.1 km from the valley floor, where built as magma cooled down.

No apart from that quite relevant difference, there are also some remarkable similarities between the formations created in Yosemite and for example those at “Arches National Park”. The formations visible today, where buried below a massive amount of other layers. At Yosemite, this layer was the insulator, to have the magma cooling down slow enough to form granite and of course keeping things in shape by the pressure created by those stone layers. Arches these layers where required to compress the sandstone, which is visible today on the surface. In both places, these massive layers of rock haven been eroded away, and what we see today once was hidden bellow a several hundred meter to a few kilometer thick layers. 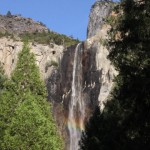