Just a bit outside of the “Yosemite National Park” lies the Mono Lake.

This is quite a bit a special place. As the lake only features incoming, but no outgoing water streams – the water evaporates about at the same rate as new water drips in – the lake is accumulating minerals. So in fact, the Mono Lake is an inland salt lake, which has a concentration of approximately 2.5 times the salt concentration as found in the oceans.

This environment is not very well suited for most living organisms. But a set of interdependent species evolved, creating a mini eco-system. Basically there are some (invisible) microorganism feeding from the minerals in the water, a special species of flies and birds feeding on the flies.

There are in fact so may flies at the shore of the lake, that in some places, the shore is black and when one walks by a black cloud hovers 30 cm above the ground. Similarly, when gulls chase the flies, it looks like they are blowing away some dust. Quite obviously, the gulls seem to be able to feed on the few flies, which turn around in the wrong direction in that mini chaos. 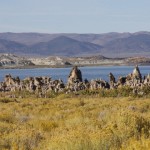 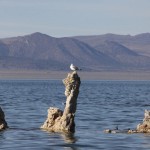 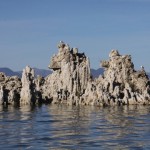 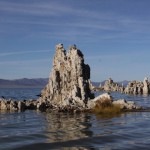 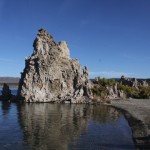 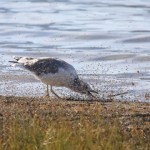 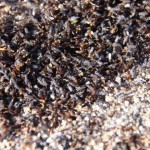