A bit outside of Moab, one can find a short “Dino Track”. Directions to which are available a the local land management agency and basically involve driving into no mans land 15 miles north of Moab on a dirt road.

Once there, there should be a short track, where dinosauric bones and petrified wood can be observed. However, the track is hardly visible and I just went past it on something like the “long loop” around two of those fancy mountains.

That track, which took me roughly 9 km, was quite a bit more interesting than the official “Dino Track”, which I finally found once I did return from my excursion. On that long trip through no mans land, first a dried out riverbed had to be passed, then there where some markings – presumably for mountain bikers – on the ground. That stone flat, which slightly went uphill to one of the butes, was covered with those typical sinks, where water sometimes gathers. In some of the places, where one would expect flowing water from time to time, there were collections of quite remarkably strange stones. Most of them white or yellowish colored and with quite a bit of structure and but very smooth texture.

As I learned some days ago near Vernal, dinosaur bones do have that smooth texture. And the structure I could make out would perfectly fit to old bones, so does the fact that in this area, there was an ancient river, which may have carried and crushed the bones into those rather small fragments.

In some places there where so many of these bone fragments, that it looked like gravel. But on closer inspection the true nature of these “Strange Stones”, was obvious. 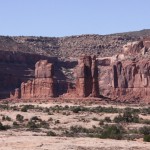 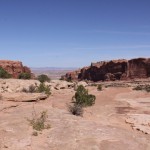 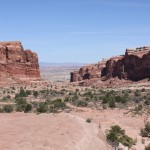 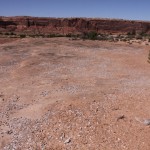 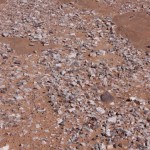 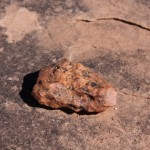 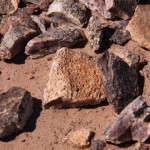 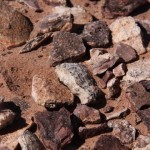 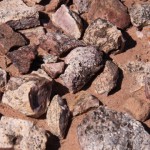 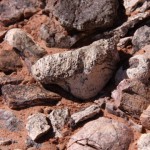 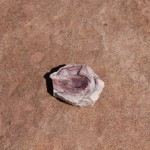 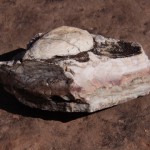 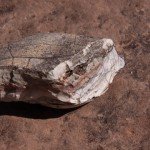